Use the icons to visit the Fort Osage Alumni Facebook page or to contact us with any questions.  Don't forget to sign our guestbook below.
The History of Woodland School Based on the writing of  Mrs. V.H. Sullivan
and prepared by Larry Deaton, Assistant Superintendent of the Fort Osage School District in September 1984

Woodland School was numbered District #54 in about 1910.  At that time there were 100 schools in Jackson County.  The name Woodland has no special significance except at the time the school was established the area had many trees.

Inside the building some of the seats were large enough to seat two pupils.  the desk the pupils were to use were attached to the seat of the one in front and often the pupil in front would jar the desk of the pupil behind them making a noise to the delight of the pupils.  The school could comfortably seat 38 pupils in the room, but in the school year of 1921-1922, there were 41 pupils, so it required some adjusting.

Click Here to read more about Woodland
Memories of Woodland 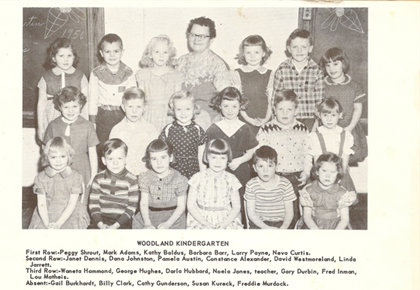